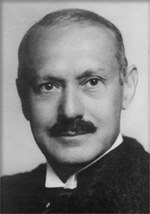 Elemér Hantos was a Hungarian economist and one of the principal promoters of Central European and Pan-European integration during the interwar period. He was born in Budapest on November 12, 1880. He graduated from the Lutheran High School of Sopron and then studied Law and Political Sciences at the University of Budapest. After study visits in Vienna, Leipzig, Paris, Cambridge and Oxford, he obtained a doctorate at the University of Budapest.

Elemér Hantos embarked on a political career in 1910 and became a member of the Hungarian Parliament for the National Party of Work. During World War I, Hantos published several books on the Austro-Hungarian wartime public finances. His financial expertise propelled him Secretary of State at the Hungarian Ministry of Trade in 1917. As a representative of the Hungarian government, Hantos participated in negotiations between Germany and Austria-Hungary on a customs union.

In 1918, Hantos was appointed president of the Postal Savings Bank, which served for a brief period as the Hungarian central bank after the break-up of the Austro-Hungarian monarchy. In parallel to his political career, Hantos started to teach Finance at the University of Budapest in 1917. After the break-up of the Austro-Hungarian monarchy, Elemér Hantos abandoned his political career in Hungary and dedicated himself to the promotion of Central European integration.

During the interwar period, the new borders created by the Peace Treaties of Trianon and Saint-Germain-en-Laye were hindering economic trade in Central Europe. To remedy the situation, Elemér Hantos wanted to recreate the economic area of the Austro-Hungarian monarchy, extended to the new borders of the successor states, however without restoring the pre-war political order. To promote his idea of Central European economic integration, Elemér Hantos organized the first Central European Economic Conference with Julius Meinl in Vienna in 1925.