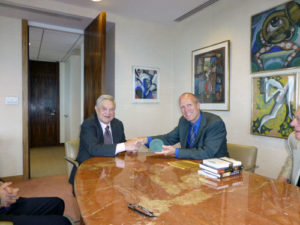 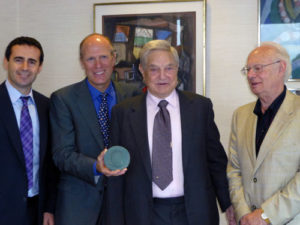 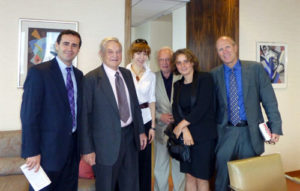 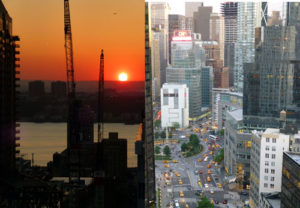 The recipient of the 2011 Dr. Elemer Hantos prize was George Soros. He was awarded his prize in his offices in New York City by Stefan Messman, chairman of the award committee, and Randy Charles Epping, President of the Central Europe Foundation.

George Soros has been a prominent international supporter of democratic ideals and causes for more than 30 years. His philanthropic organization, the Open Society Foundations, supports democracy and human rights in over 70 countries. Born in Budapest in 1930, George Soros is Chairman of Soros Fund Management LLC. He also is the major supporter of the Central Europe University in Budapest.

Creating a foundation in Hungary to support culture and education and facilitate the country's transition to democracy. (One early action entailed importing photocopy machines that allowed citizens and activists in Hungary to spread information and publish censored materials.)

Contributing $50 million to the Millennium Villages initiative, which seeks to lift some of the least developed villages in Africa out of poverty and into self-sustainability.

Assisting the Soviet physicist-dissident and human rights activist Andrei Sakharov, who was awarded the Nobel Peace Prize in 1975.

Contributing $100 million toward providing Internet access to every regional university in Russia.

Donating $50 million to help the citizens of Sarajevo endure the city's siege during the Bosnian war, funding among other projects a water-filtration plant that allowed residents to avoid drawing water from distribution points targeted by Serb snipers.

Helping halt the spread of tuberculosis and HIV/AIDS by joining with global and community-based organizations and activists in Europe and Asia to obtain funding for needle exchange programs and other HIV-related services.

Collaborating with the Margaret Mead Traveling Film Festival to support documentary filmmakers in the Caucasus and Central Asia.

Producing a guide to inclusive educational practices for special needs children in Serbia.

Integrating legal services into HIV prevention and treatment programs in East Africa to protect the rights of those living with AIDS against traditional authorities who may be ignorant of or unwilling to apply the law in cases involving people with HIV/AIDS.

Supporting a review of education policies for special needs children in Kyrgyzstan, Tajikistan and Kazakhstan, publicizing the findings of the review, and funding projects for community-based services for these children.

Operating EurasiaNet, a Web site that offers news and analysis of developments in Central Asia and the Caucasus. English and Russian language versions of EurasiaNet aim to inform policy decision makers as well as the general public about issues in the region.

Prompting changes in Turkey's treatment of mentally disabled people. Patients have more access to outdoor activities and better hospital food, and the use of electroshock therapy without anesthesia is banned.

Sponsoring photojournalism workshops for youths in the Middle East and North Africa in which students learn to tell their stories through photography, using simple digital cameras and open-source software.

Joining with 40 international groups and experts from around the world to issue a call to action urging governments to reform ineffective and harmful drug policies. The Foundations advocate a drug policy based on scientific and medical research, not politics, that promotes humane treatment of drug users and reduces drug-related violence and health risks.

Supporting the Belgrade Open School in Serbia, an alternative school that incorporates multidisciplinary courses and interactive teaching methods in its curriculum.

Advising developing countries in negotiating migration agreements with developed countries to ensure the protection of migrants' human rights and freedom of movement, and the transparency and accountability of the agreements.

Hosting the OSI Youth Initiative global meeting, which provided an opportunity for leaders from various youth organizations to discuss their efforts to shape public life in their communities.