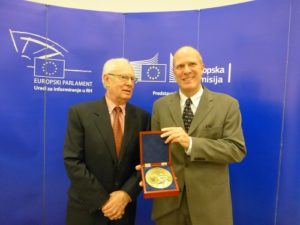 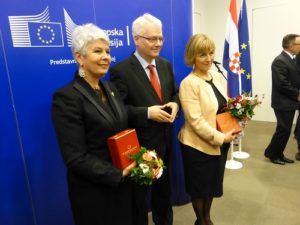 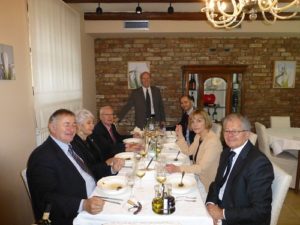 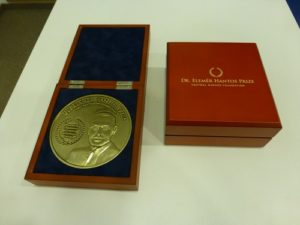 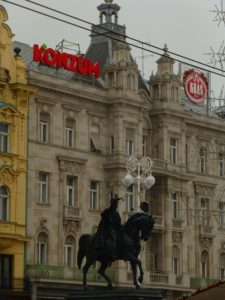 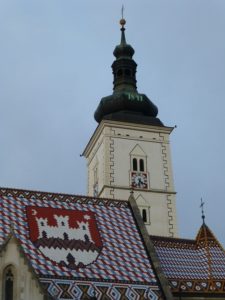 The two recipients of the 2013 Dr. Elemer Hantos prize were Vesna Pusic & Jadranka Kosor. They were awarded his prize in a nationally—televised ceremony in Zagreb, Croatia. Awarding the prize were Stefan Messmann, chairman of the Central Europe Foundation award committee, and Charles Epping, President of the foundation.

Working from opposite sides of the political spectrum, the two parliamentarians were instrumental in bringing Croatia into the European Union. Both encompass perfectly the ideals of Dr. Elemer Hantos, who worked tirelessly to promote economic cooperation in Central Europe.

In 1992 Pusic was the co-founder and director of the Erasmus Guild, a nongovernmental, nonpartisan think-tank for the culture of democracy, and the publisher and editor of the journal Erasmus, focusing specifically on different issues of transition in Croatia, countries of former Yugoslavia and Eastern Europe.[1] Erasmus Guild ceased operations in 1998.

In 2005 and 2008,[4][5] she was made Chairwoman of the National Committee for EU negotiations, the body that oversees accession negotiations and is composed of members of parliament as well as representatives of the President, the academic community, employers, and union representatives. In 2006 and 2008 she was elected vice-president of ELDR.[1]

In the Croatian presidential election, 2009–2010, Pusic was the HNS-LD candidate. She won 7.25% in the first round, placing fifth out of twelve candidates, and was thus eliminated from the second round.

Note: On September 3, 2015 the Croatian Government nominated Pusic as the official Croatian candidate for 2016 UN Secretary-General. Her nominations was officially submitted on 14 January 2016.

Kosor started working as a journalist, following her graduation from Faculty of Law of University of Zagreb. During the Croatian War of Independence, she hosted a radio show dealing with refugee problems and disabled war veterans. She joined the centre-right Croatian Democratic Union (HDZ) in 1989 and quickly climbed up the party hierarchy. In 1995 she was elected party vice-president and was elected to serve in Parliament for the first time.

As Prime Minister, she strongly advocated a zero tolerance policy to political corruption and organized crime. This uncompromising stance, along with the new criminal code passed before her term began, opened the door to unprecedented efforts to combat corruption. This resulted in numerous arrests of influential business-people and politicians from across the political spectrum…

In foreign policy, Kosor and her Slovenian counterpart Borut Pahor were successful in solving the long-standing border dispute and she is credited with successfully finishing the negotiating process of the Croatian accession to the European Union. On 9 December 2011, she and President Ivo Josipovic signed the Treaty of Accession in Brussels.

Arranging the award ceremony, which was broadcast on Croatian national radio and television, was prize committee member Josip Kregar, Croatian sociologist, jurist and politician. Dr. Kregar is a tenured professor at the University of Zagreb, Faculty of Law and an independent member of the Zagreb City Council since 2009.