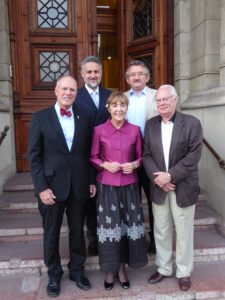 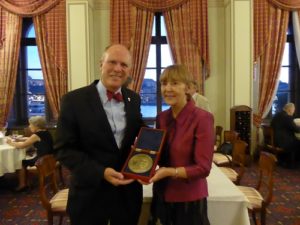 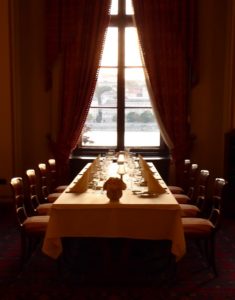 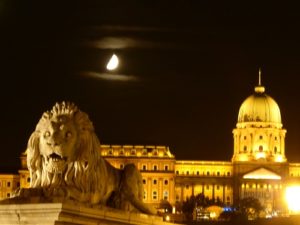 The winner of the 2015 Dr. Elemer Hantos is Dr. Monica Luisa Macovei, a Romanian politician, lawyer and former prosecutor, currently a Member of the European Parliament. She was the Minister of Justice of Romania in the first cabinet of Prime Minister Calin Popescu-Tariceanu. In this position, she was credited with implementing the justice reforms required for Romania to become a member state of the European Union.

Financial Times (2006): "a hero who presided over Romania's transformation from one of Europe's most corrupt corners into a credible candidate to join the European Union"; Die Welt (2006): "For Romania, joining the European Union would have been barely possible without Monica Macovei" and "as a consequence, 22 million Romanians have why to thank her"; Sonntagszeitung (2012): "Ms. Macovei represents the other, decent Romania"; and Le Monde (2013) "the «Cerberus» of human rights" and "the icon of militant circles.

POSITIONS AND ACTIVITIES IN THE EUROPEAN PARLIAMENT

Drafted and negotiated 40 reports (laws and discharge reports), adopted by the Plenary; amended and negotiated 48 reports as shadow rapporteur
Drafted and tabled over 1.700 amendments for more than 130 legislative reports, inter alia, in the area of transparency, anti-fraud, anti-corruption, public procurement, conflict of interests, civil rights and reforms in the EU candidate countries
Initiated and drafted the Written declaration and Resolution on the Union’s efforts in combating corruption adopted by the European Parliament; initiated and budgeted a pilot project that identified in 2013 the direct costs of corruption in 8 Member States, in Public Procurement involving EU funds
Led the Parliamentary Cooperation Committee meetings with the Republic of Moldova, drafted, negotiated and adopted Recommendations; organized meetings and hearings on the implementation of the European commitments within the negotiations for the Association Agreement with the EU, the Deep and Comprehensive Free Trade Area, the Visa liberalization Action Plan and the Transnistrian region by the Moldovan authorities; led the EP election observation mission for the 2010 early parliamentary elections in the Republic of Moldova; drafted and negotiated Resolutions on the Republic of Moldova adopted by the plenary
Co-signed over 300 Resolutions mostly on human rights breaches in third countries
Held over 500 speeches in the Plenary. Addressed over 170 questions to the European Commission and Council. Organized public hearings
Romanian Parliament
Drafted and initiated through national MPs the Law eliminating the statute of limitation (i) for murder and (ii) for war crimes, genocide and crimes against humanity irrespective of the date of their commission; the law was adopted in 2012

2005-2007 Minister of Justice, Government of Romania
Contributed to Romania's EU accession on 1 January 2007 through policies and actions that eliminated serious concerns ("red flags") raised by the EU on: high level corruption, justice reform, money laundering and intellectual property rights.
Elaborated and implemented the National Strategies and Action Plans 2005-2007 for the reform of the judicial system and the fight against corruption in Romania
Established the Anticorruption Prosecutor’s Office (DNA) to investigate high level corruption and fraud, including fraud against EU funds
Elaborated the draft of the new Criminal Code; resumed the drafting of the Civil and Civil Procedure Codes; initiated the drafting of the new Criminal Procedure Code
Initiated and defended legislation in Government and Parliament, referring, among others, to: public declaration of assets and interests for all public officials and judiciary; justice reforms; lustration of judges and prosecutors found as collaborators with the former Securitate; National Anticorruption Directorate (DNA) and its jurisdiction; incriminate conflict of interest; anti-money laundering; insolvency; companies; funding political parties and campaigns, abrogation of the crimes of insult and defamation etc.
Established and maintained permanent and direct contacts with European Commission, European Parliament, governments and parliaments of EU Member States, international NGOs, foreign media
Negotiated with the World Bank the Loan Agreement for the Judicial Reform Project of €110 million signed in January 2006 (the largest Judicial Reform Project of the World Bank at the time)

2002-2004 Judicial Reform Resident Expert, Bosnia and Herzegovina, seconded by the Council of Europe
Implemented the joint project of the Council of Europe and European Commission for (i) strengthening the independence and effectiveness of the judiciary system in Bosnia & Herzegovina and (ii) ensure that reforms are in line with the European Court of Human Rights jurisprudence
Participated in establishing the judicial and prosecutorial Councils, reappointing judges and prosecutors, and drafting a new Civil Procedure Code and preparing its implementation

1999-2000 Senior Legal Advisor, OSCE Mission in Kosovo - seconded by the Council of Europe
Participated in setting up of the Ombudsman Office and the process of appointing judges and prosecutors; drafted legislation
Organized training sessions for judiciary staff, public administration staff, NGOs and students
Organized debates on legal drafts with all ethnic groups
Organized “getting together” events in a post-civil war society

1995-2002 Expert, Council of Europe, Legal and Human Rights Directorates, Monitoring Unit of the Secretary General of the Council of Europe
Led activities and missions for the development and consolidation of democratic stability in: Russian Federation, Ukraine, Lithuania, Albania, Moldova, The Czech Republic, Georgia, Macedonia, Serbia, Bosnia and Herzegovina, Armenia, others
Trained over 1000 judges, prosecutors, defense lawyers, journalists, NGOs and public authorities on the rule of law, the European Convention of Human Rights and the Court's jurisprudence
Led monitoring missions on freedom of expression in some Member States on behalf of Council of Europe's Secretary General
Drafted and defended reports before the Committee of Ministers of the Council of Europe
Wrote handbooks for applying the European Court of Human Rights case-law on freedom of expression and the right to liberty and security

1997 – present Lawyer, Member of the Bucharest Bar Association - presently not practicing at own request
Defended victims of civil rights violations before national courts and the European Court of Human Rights (ECtHR); won 20 cases at the ECtHR for Romanian applicants

1998-2000 Expert, Group of Specialists on Media Law and Human Rights, Council of Europe
Drafted recommendations for adoption by the Committee of Ministers of the Council of Europe on the right of journalists not to disclose their sources, information through the media in the context of legal proceedings, dissemination of information and opinions in the media about political figures and public officials, freedom of expression and the right to privacy